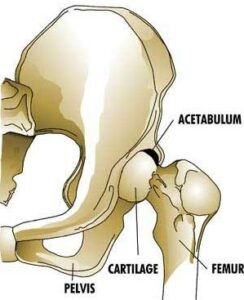 I recently saw an ad for a new hip procedure where a women was out walking her dog weeks after hip replacement surgery. She had been given the new anterior hip replacement approach.  The commercial was promoting the quicker recovery of this type of surgery and the women was walking with the biggest smile on her face I’ve ever seen.

I went directly to the website. Happy patients at the facility in Boston, waxed euphoric, including their full names and hometowns in their endorsements. Patients had to be incredibly impressed to be willing to do that, I reasoned.

The institute described itself as “the premier healthcare provider in hip surgery.” Physicians there employed “a wide variety of high-tech assisted techniques,” performed while the patient was “under local anesthetic.” The Band-Aid on the woman on the beach covered “only one three-millimeter incision at the surface.” Naively, I reasoned that an incision that small meant that the disruption of the bones and soft tissue beneath the skin was also minimal.

The bottom line is that there is plenty of research to indicate that no matter what type of hip surgery is performed by even the best surgeon in the world, the outcomes are, at best, 80 percent successful.

For the frustrated patient, direct-to-consumer medicine, such as what exists at the unnamed institute and countless other entities crawling the Web, appears to be the best way to skirt the relentless red tape of the medical-industrial complex. But it’s essential to realize that healthcare companies that market their services this way on the Internet exist in a regulatory netherworld. The institutions that patients expect to safeguard them—the FDA, the American Medical Association, and the Joint Commission on Accreditation of Healthcare Organizations (JCAHO, or the Joint Commission, for short), among others—exercise little or no authority over how such entities conduct their businesses. Although ads that drug makers pay for typically carry disclaimers, there are far fewer such requirements for outfits that sell surgical procedures, so they can tout convenience, speed, and the size of the incision without ever discussing the risks.

For a long while, it was understood that opioid addiction was the outcome of misuse or abuse and was unrelated to doctors’ prescribing habits. “The reality is that the vast majority of people who are given these medications by doctors will not become addicted,” Russell Purdue told those assembled for a media gathering at a D.C. press conference. Repeatedly, Purdue described a “bright line” between the state of addiction and that of physical dependence in the treatment of chronic pain. For patients who needed pain control, Purdue said, access to chronic opioid therapy was no different from providing insulin to a diabetic.

Some regarded that comparison as outrageous. Andrew Kolodny, at the time an addiction psychiatrist at Maimonides Medical Center in New York City, had founded a group called Physicians for Responsible Opioid Prescribing (PROP). (Subsequently, he would be chief medical officer at Phoenix House before accepting the position of co-director of opioid policy research at Brandeis University.) In 2011, Kolodny explained that physicians who overprescribed to patients with non-cancer chronic pain were largely responsible for having created the epidemic of addiction, not only to prescribed opioids but also to heroin. “The reason we have a severe epidemic of opioid addiction,” Kolodny said, “is that we have overexposed the U.S. population to opioid pain medicine. The people who are using heroin are out there using heroin because they were first addicted to opioid pain medicines.” In 2010, enough painkiller prescriptions were written and filled to medicate every American adult around the clock for a month.

The sad statistic is that it is projected that over 70,000 Americans will accidently overdose from the use of opioids in 2018. That is more than we lost in the entire Vietnam war. Seek nonpharmacological treatment for your hip pain, and your best bet is a physical therapist.

A new report comparing some common tests, procedures, and treatments has found that hospital outpatient departments (HOPDs) consistently charge and are reimbursed more than community-based settings for the same services. For physical therapy, HOPDs charged on average 50 percent more than freestanding clinics.

The study, conducted by the former Center for Studying Health System Change and published by the National Institute for Health Care Reform, used private insurance claims data from 2011 for about 590,000 active and retired nonelderly autoworkers and their dependents to track charges for magnetic resonance imaging (MRI) of the knee, colonoscopies, common laboratory tests, and physical therapy. What researchers found was that where the service was provided made a big difference in how much was charged.

This highlights a much bigger problem. The reason that health insurance is skyrocketing in price is because the cost of healthcare is growing out of control. Health systems with the “we fix everybody” approach are driving up the costs to provide the service, and the burden, in turn, is placed on the patient, not the insurance companies.

The bottom line is that you have a choice of where you go for treatment, and your referral is good at any location anywhere in the state. Without making an educated choice, you risk being ripped off.

According to a study published in the British Medical Journal in December of 2015, in which they imaged many people who had no pain in their hips, the results were that hip pain was not present in many hips with osteoarthritis, and many hips with pain did not show osteoarthritis. Most older participants with a high suspicion for osteoarthritis of the hip did not have it. So, the image does not tell a complete story as to why you have hip pain. You may or may not have arthritis. Yet this is the main indicator that a surgeon uses to tell a patient they need surgery. You don’t need an MRI to find a solution to your hip pain; however, if you get an MRI or X-ray, you are much more likely to be told that you need a hip replacement. There is a pile of research that shows the same results that hip X-rays and MRI’s do not necessarily show why your hip is hurting.

Physical therapists can assess hip pain, movement, and function in order to find patients a natural solution without medications, injections, or surgery. I would highly recommend going that route before ever considering a hip replacement, even if you’ve been told that you have arthritis, are bone on bone, and that surgery is the only answer.

Injections have recently been shown not only to be ineffective at long-term hip pain relief but also to increase the speed of cartilage degeneration, making the situation worse. Injections of corticosteroids are designed to reduce pain by decreasing inflammation but can have side effects and long-term consequences

Ask specific questions about why you are being referred to a particular practitioner or facility. Ask if there is any financial reason for your doctor to send you there. Ask if there is a financial arrangement between the doctor and the treatment provider. Do not go somewhere simply because your doctor makes more money from the referral. That’s not a good idea. This often leads to overspending, lower quality of care, and more likely ending up with a hip replacement. Recently, health system or physician referral for profit has become a big problem that patients are typically unaware of. You need a referral that is in your best interest, not the health systems’.

The information, including but not limited to, text, graphics, images and other material contained on this website are for informational purposes only. The purpose of this website is to promote broad consumer understanding and knowledge of various health topics. It is not intended to be a substitute for professional medical advice, diagnosis or treatment. Always seek the advice of your physician or other qualified health care provider with any questions you may have regarding a medical condition or treatment and before undertaking a new health care regimen, and never disregard professional medical advice or delay in seeking it because of something you have read on this website.

Superior Physical Therapy does not recommend or endorse any specific tests, physicians, products, procedures, opinions or other information that may be mentioned on this website. Reliance on any information appearing on this website is solely at your own risk.

Thanks for signing up!

The information, including but not limited to, text, graphics, images and other material contained on this website are for informational purposes only. The purpose of this website is to promote broad consumer understanding and knowledge of various health topics. It is not intended to be a substitute for professional medical advice, diagnosis or treatment. Always seek the advice of your physician or other qualified health care provider with any questions you may have regarding a medical condition or treatment and before undertaking a new health care regimen, and never disregard professional medical advice or delay in seeking it because of something you have read on this website.

Superior Physical Therapy does not recommend or endorse any specific tests, physicians, products, procedures, opinions or other information that may be mentioned on this website. Reliance on any information appearing on this website is solely at your own risk.